In this tutorial, we'll examine Java Flight Recorder, its concepts, its basic commands, and how to use it.

Java is not just a programming language but a very rich ecosystem with a lot of tools. The JDK contains programs that allow us to compile our own programs, as well as monitor their state and the state of the Java Virtual Machine during the full life cycle of program execution.

The bin folder of a JDK distribution contains, among others, the following programs that can be used for profiling and monitoring:

We suggest exploring the content of this folder to be aware of what tools we have at our disposal. Please note that the Java VisualVM was part of the Oracle and Open JDK distributions in the past. However, starting from Java 9, JDK distributions no longer ship with Java VisualVM. Therefore, we should download it separately from the VisualVM open source project website.

In this tutorial, we'll focus on the Java Flight Recorder. This isn't present among the tools mentioned above because it isn't a standalone program. Its usage is closely related to two of the tools above — Java Mission Control and Diagnostic Command Tools.

Java Flight Recorder (JFR) is a monitoring tool that collects information about the events in a Java Virtual Machine (JVM) during the execution of a Java application. JFR is part of the JDK distribution, and it's integrated into the JVM.

JFR is designed to affect the performance of a running application as little as possible.

In order to use JFR, we should activate it. We may achieve this in two ways:

JFR doesn't have a standalone tool. We use Java Mission Control (JMC), which contains a plugin that allows us to visualize the data collected by JFR.

These three components — JFR, jcmd and JMC — form a complete suite for collecting low-level runtime information of a running Java program. We may find this information very useful when optimizing our program, or when diagnosing it when something goes wrong.

If we have various versions of Java installed on our computer, it's important to make sure that the Java compiler (javac), the Java launcher (java) and the above-mentioned tools (JFR, jcmd and JMC) are from the same Java distribution. Otherwise, there's a risk of not being able to see any useful data because the JFR data formats of different versions might be not compatible.

There are three types of events that JFR collects:

The events that JFR collects contain a huge amount of data. For this reason, by design, JFR is fast enough to not impede the program.

JFR saves data about the events in a single output file, flight.jfr.

As we know, disk I/O operations are quite expensive. Therefore, JFR uses various buffers to store the collected data before flushing the blocks of data to disk. Things might become a little bit more complex because, at the same moment, a program might have multiple registering processes with different options.

In some rare cases, JFR might fail to flush the data (for example, when there are too many events or in a case of a power outage). If this occurs, JFR tries to inform us that the output file might be missing a piece of data.

4. How to Use Java Flight Recorder

JFR is an experimental feature, hence its use is subject to change. In fact, in earlier distributions, we have to activate commercial features in order to use it in production. However, starting from JDK 11, we may use it without activating anything. We can always consult the official Java release notes to check how to use this tool.

For JDK 8, to be able to activate JFR, we should start the JVM with the options +UnlockCommercialFeatures and +FlightRecorder.

As we've mentioned above, there are two ways to activate JFR. When we activate it simultaneously with starting the application, we do it from the command line. When the application is already running, we use the diagnostic command tool.

First, we compile the program's *.java file into a *.class using the standard java compiler javac.

Once the compilation succeeds, we may start the program with the following options:

where path-to-class-file is the application's entry point *.class file.

This command launches the application and activates the recording, which starts immediately and lasts no more than 200 seconds. Collected data is saved in an output file, flight.jfr. We'll describe the other options in more detail in the next section.

We can also start registering the events by using the jcmd tool. For example:

Prior to JDK 11, in order to be able to activate JFR in this way, we should start the application with unlocked commercial features:

Once the application is running, we use its process id in order to execute various commands, which take the following format:

We've already seen an example of the usage of these parameters at the beginning of this section. For the complete list of the parameters, we may always consult the Java Flight Recorded official documentation.

Although JFR is designed to have as little of a footprint as possible on the performance of the JVM and the application, it's better to limit the maximum amount of collected data by setting at least one of the parameters: duration, maxage, or maxsize.

Our program inserts objects into a list until an OutOfMemoryError occurs. Then the program sleeps for one second:

Without executing this code, we can spot a potential drawback: the while loop will lead to high CPU and memory usage. Let's use JFR to see these drawbacks and probably find others.

First, we compile our program by executing the following command from the command line:

At this point, we should find a file FlightRecorder.class in the out/com/baeldung/flightrecorder directory.

Now, we'll start the program with the following options:

Now, we feed the file flight.jfr to Java Mission Control, which is part of the JDK distribution. It helps us visualize the data about our events in a nice and intuitive way.

Its main screen shows us the information about how the program was using the CPU during its execution. We see that the CPU was loaded heavily, which is quite expected due to the while loop: 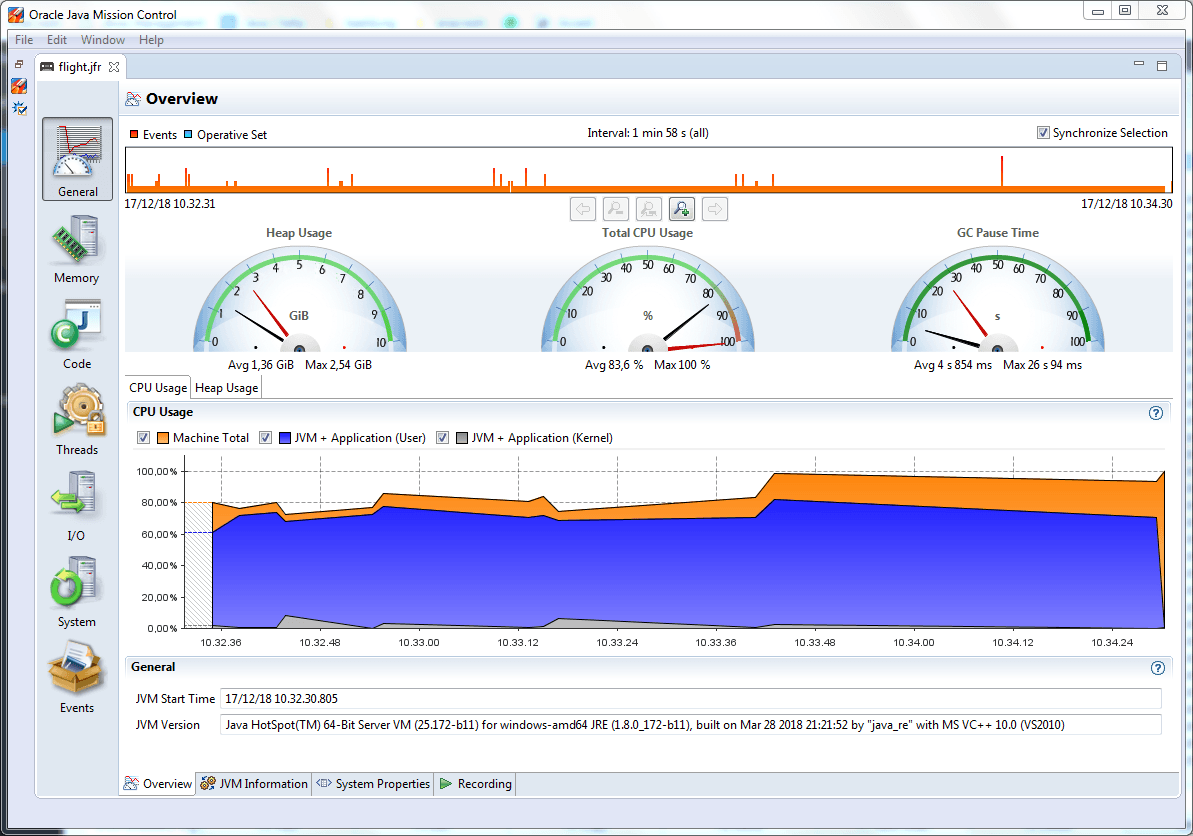 On the left side of the view, we see sections General, Memory, Code, and  Threads, among others. Each section contains various tabs with detailed information. For example, tab Hot Methods of section Code contains the statistics of method calls: 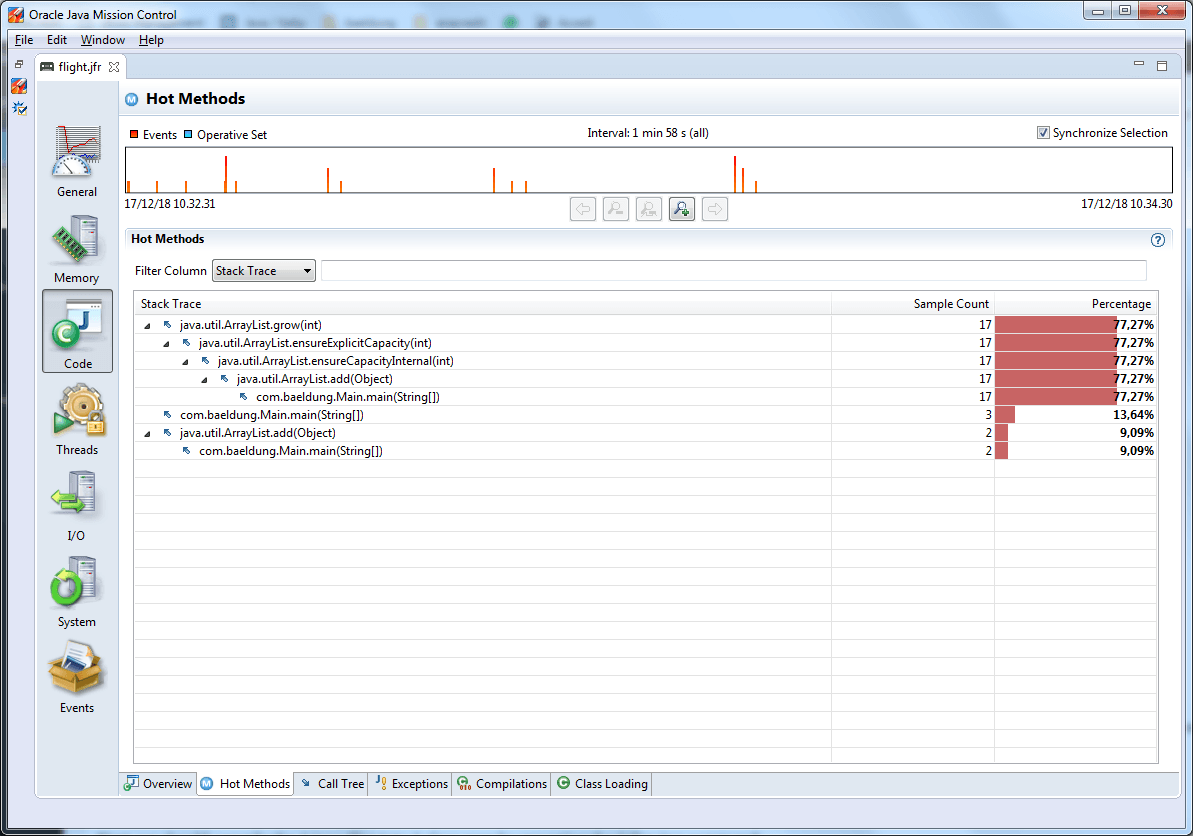 In this tab, we can spot another drawback of our example program: method java.util.ArrayList.grow(int) has been called 17 times in order to enlarge the array capacity every time there wasn't enough space for adding an object.

In more realistic programs, we may see a lot of other useful information:

In this article, we introduced the topic of monitoring and profiling a Java application using Java Flight Recorder. This tool remains an experimental one, so we should consult its official site for more complete and recent information.

As always, the code snippet is available over on our Github repository.